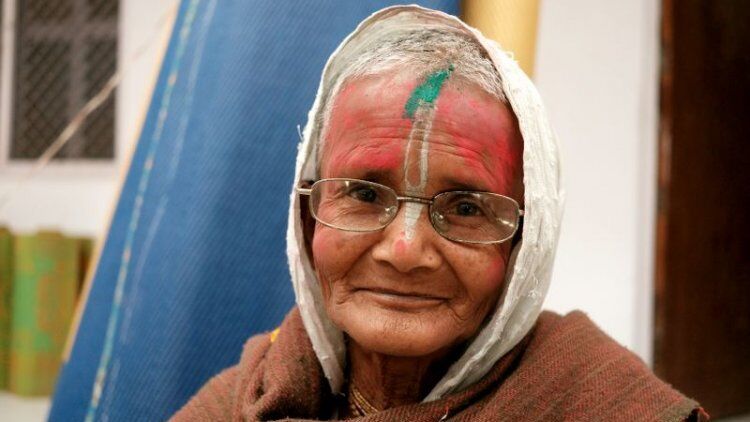 Lakshmi lived with her parents in Kolkata. She belonged to an impoverished family. As they were hardly able to make ends meet, they decided that the best way forward for Lakshmi was to get her married.

She was married off at the tender age of 15 to a daily wage laborer.

Unfortunately, her husband got addicted to alcoholism and ended up spending most of his earnings on alcohol. She had two sons and two daughters from the marriage. The complete responsibility of raising her children was on her.

She raised her children with a lot of struggle and got them married. Her daughter left for their marital home and her sons started taking care of their own families.

When Lakshmi’s husband passed away, she went to live with her sons. However, they didn’t want her burden. They did not take care of her nor did they give her enough food or clothes. She suffered all of that in silence.

However, they soon started to abuse her physically, she then left home and came to Vrindavan.

She began to beg for food in Vrindavan. While she was on the streets on Vrindavan, a project Jeevan team member found her.

Ever since she has found a place to call home. She is not scared of shivering in the cold during winter. She knows she has a warm and clean shelter. She receives new clothes twice a year and has access to primary health care.

Although she still misses her family, Lakshmi is grateful to Maitri for providing her with a safe place to live and clean clothes during her old age.

Without the help of Maitri, Lakshmi would have been begging on the streets for basic sustenance.

You can also help poor elderly widows get access to basic clothing and winter wear. You can donate so that they can live their golden years in peace. You can give with confidence because every program listed